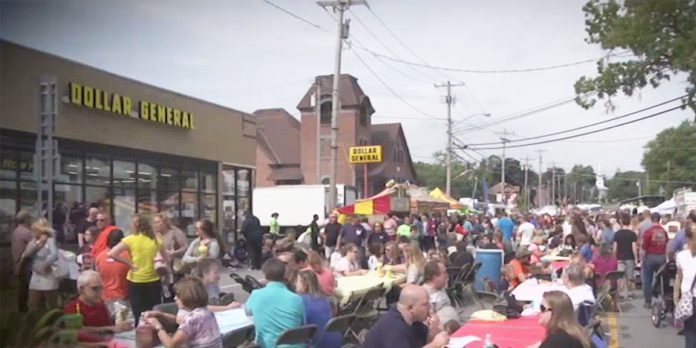 LOWVILLE, NY — Organizers of the annual Cream Cheese Festival have
announced this year’s event, slated for Saturday, Sept. 19, has been canceled.

The move comes amid concerns over the Coronavirus (COVID-19) pandemic and the current inability to host events with 25 or more people due to restrictions put in place by the office of Governor Andrew M. Cuomo.

Festival chairman Jeremiah S. Papineau said the decision was a difficult one.

“This has been a conversation among our committee members over the past several weeks and was really put under the microscope following the cancellation of the Lewis County Fair,” Mr. Papineau said.

“When we learned of the Adirondack Balloon Festival canceling last week, it was
the first event we had heard about that late in the year that was canceled,” he said. “And when we learned of the Ogdensburg Seaway Festival canceling, we found a big decision that played into that was a state requirement for vendors and volunteers to be COVID tested at an astronomical cost to that festival’s committee.”

One of that festival’s chairpersons, he said, was quoted as saying the cost of testing 100 of their volunteers alone would be $35,000 – a figure that does not include testing vendors he confirmed upon contacting her.

“If a festival of their size can’t justify paying that cost for a more than week-long
event, we certainly can’t justify that for our one-day festival,” said Mr. Papineau.

“We have that many volunteers or more for our event and it’s just not economically feasible.”

Mr. Papineau also learned those attending the Ogdensburg festival would have to be screened for COVID-19 symptoms, personal protective equipment and hand sanitizing station would have to be readily available and social-distancing would have to be enforced – all measures the Cream Cheese Festival would most likely have to comply with even in September. He further stated answers to questions about liability are also unclear in the event someone were to contract COVID-19 and succumb to the virus or transmit it to someone who then passed it on to someone else and that person passed away.

“Even if we were 100 percent in the clear when it comes to liability, if we lost even
one person to this virus because our desire to host a fun event overrode our desire to do the responsible thing, that’s one life too many and something I couldn’t personally live with,” he said.

Mr. Papineau said some may question the decision to cancel this year’s event in
general, let alone canceling it three months in advance. However, anyone who’s ever organized a large-scale event, he said, knows there is “a lot of work that goes into one and there are many people’s schedules to work with.”

“Letting someone know a week before an event or even a month before doesn’t give them much time to make other plans,” said Mr. Papineau. “And while our massive attendance is a great thing economically for our region and for our vendors, in the midst of a pandemic, it’s also what is our biggest concern. We have to err on the side of caution, not to mention we have no clear guidance an event of this size would even be allowed in September. It’s highly unlikely from the conversations I’ve had with government leaders and public health professionals.”

Kristen F.W. Aucter, executive director of the Lewis County Chamber of Commerce
and a member of the Cream Cheese Festival’s planning committee, said the festival has become “a well-known event in the community over the last 15 years.”

“It is with sadness and a heavy heart that this decision has been made,” she said.

“However, the mandates would take too heavy of a financial toll on the event and there is the responsibility the committee has for the health and safety of the vendors, volunteers and attendees.”

Despite the cancellation of this year’s festival, Mr. Papineau and Ms. Aucter said
they and the rest of the Cream Cheese Festival planning committee are looking forward to the event’s return next year.

“This isn’t goodbye. It’s simply see you next year,” said Mr. Papineau. “We can’t
wait to get back together next September, hopefully in a world where we’ve put the
Coronavirus – and all the uncertainty and anxiety that comes with it – well behind us.”

ABOUT THE CREAM CHEESE FESTIVAL

The Cream Cheese Festival has attracted much attention since its inception in 2005. The popular travel website TripAdvisor listed the Cream Cheese Festival as one of the top 10 wackiest summer festivals in 2011 and 2012. It has also received similar designation from The Weather Channel. The event has brought much attention to Lewis County and brought many people to the region, helping the local economy if even one day a year. In 2013, Lowville was recognized as home of the World’s Largest Cheesecake by Guinness World Records. That year, the festival welcomed a representative from Guinness World Records who certified the cheesecake made by the plant on Utica Boulevard was indeed the world’s largest. The massive creation weighed in at 6,900 pounds — more than 2,000 pounds heavier than the prior mark of 4,703 set in 2009 by a Kraft Foods plant in the country of Mexico.