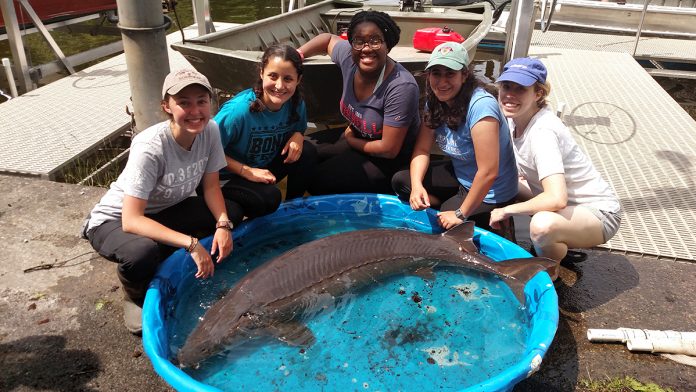 “This catch is great news for New York’s lake sturgeon recovery program,” Commissioner Seggos said. “The 139-pound sturgeon is the largest recorded from Oneida Lake since stocking began and it’s an encouraging sign that efforts to recover this ancient fish, listed as a threatened species in New York since 1983, are working.”

DEC began stocking lake sturgeon in Oneida Lake in 1995, to reverse past devastating losses due to overfishing and damming of rivers, which are critical spawning habitats. Since then, DEC has stocked almost 11,000 sturgeon in Oneida Lake. Before the stocking program began, the lake sturgeon population throughout the Great Lakes region was estimated at one percent of historic levels.

This large sturgeon, estimated to be 20 years old, was one of 11 caught in a single day earlier this summer. Once captured, biologists sedate the sturgeon, measure and weigh the fish, take samples to determine age, tag it, and allow the fish to recover before releasing it back into the lake.

Lake sturgeon can reach maximum lengths of greater than seven feet and can weigh more than 200 pounds. There is an historic report of an 83-inch, 104-pound sturgeon caught by an angler in Oneida Lake in 1856. The largest sturgeon recorded in New York in recent history was an 88-inch, 250-pound fish that washed up on the shores of Lake Erie in 1998.

Lake sturgeon in Oneida Lake are known to grow exceptionally quickly compared to populations in other water bodies. The fish take advantage of the lake’s high productivity and diverse food sources, including worms, snails, zebra mussels, and even winter-killed gizzard shad. The relatively warm waters of the lake help growth rates, as well.

The sturgeon stocked into Oneida Lake have also been found to migrate to the Oneida and Seneca rivers to travel into Onondaga and Cross lakes. Some fish have even traveled from the Oswego River to Lake Ontario and the St. Lawrence River.

DEC’s lake sturgeon recovery program has made great progress statewide. Anglers are now more likely to encounter lake sturgeon while fishing. Anglers should remember that there is no open season for lake sturgeon and possession is prohibited. Any lake sturgeon caught accidentally must be immediately released without harm. If anglers see a sturgeon bearing a yellow dangler tag on the dorsal (top) fin, they should make note of the number without removing the tag and contact the nearest DEC regional office. Any sightings of lake sturgeon are of interest to DEC and research partners.

For more information on the Lake Sturgeon Recovery Plan, visithttps://www.dec.ny.gov/docs/fish_marine_pdf/lakesturgeonrp.pdf.