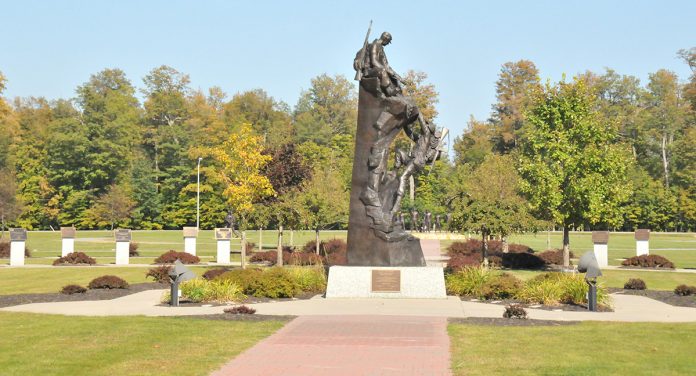 FORT DRUM, N.Y. — It’s the first Fort Drum running event to have a route that starts on post and ventures out to the neighboring community, and everyone is invited.

The inaugural Climb to Glory Memorial to Monument Run, set for 9 a.m. on Sept. 29, is nearly 11 miles in course length – beginning in Memorial Park at Fort Drum and finishing at the Honor the Mountain Monument in Thompson Park, Watertown.

Hosted by Fort Drum’s Family and Morale, Welfare and Recreation and the City of Watertown’s Parks and Recreation Department, an optional 5K course, also starting at 9 a.m., will be offered in Thompson Park.

The deadline for registration is Aug. 31 at www.eventbrite.com.

Al Janssen, FMWR chief of sports, fitness and aquatics, said that it is a flat course, with three water points along the way and one at the finish line. There is one challenging incline close to the end when runners enter Thompson Park, but the post-run party at the park is a good incentive to muster up the hill and cross the finish line. Festivities include live music and a deejay, food and beverages, a rock-climbing wall and bounce house.

Janssen said that the event originated from the concept of a division run. He said that many Army divisions will conduct one annually that goes off post as a way to let the civilian population see the formation of Soldiers running through their neighborhood.

“It gives people the chance to see the Soldiers, and it’s always a big morale booster for the division and community,” he said. “The 10th Mountain Division hasn’t had this kind of run before, so we thought we could put one together that also gets civilians involved.”

Janssen said that because Fort Drum shares intricate bonds with its North Country neighbors, this event was always intended to be all-inclusive.

“I think we have such a great relationship with our local communities, that this could really be a big event to show that partnership,” he said.

In addition to FMWR and 10th Mountain Division (LI) personnel, the Watertown Parks and Recreation, Watertown Police Department, Black River Police and NYS Police Department are also providing support for the event. The Thompson Park Zoo is offering half-price admission that day to registered runners and their immediate family members.

Participation for the Memorial to Monument Run is capped at 5,000 runners, and Janssen believes this is an attainable number.

“There are a lot of runners in the Watertown area, so I think we can easily draw a couple of thousand civilians to this,” he said. “On the Soldier side, that’s harder to anticipate because they are so busy with training and deployments, but I hope we can get them excited about this. You don’t really have to do much to entice them – I think a lot of them will come out to do it just to say they did it.”

One group that has expressed interest has a membership roster that includes civilians, veterans and active-duty Soldiers. The non-profit, veterans support organization Team Red, White and Blue (RWB) has a Fort Drum-Watertown chapter whose members are incredibly active in volunteerism and athletic activities in the area.

“The very nature of this run -beginning at Fort Drum and ending in Thompson Park – presents such a wonderful opportunity to connect local civilians and veterans with our active-duty Soldiers and Families,” said Kate Vreatt, Team RWB chapter president. “Having grown up in this community and witnessing the reactivation of the 10th Mountain Division, I love that this is all-inclusive and an opportunity to continue to build on the unity of both communities.”

Team RWB members are easily recognizable at events by their red shirts with the eagle logo, and are often seen at races running with an American flag on a staff.

“I have spoken to multiple members who have either signed up or are planning to, so you will definitely see some red shirts running it,” Vreatt said. “We are also exploring the possibility of volunteering – as we do enjoy that too.”

The group schedules a leisurely Saturday run at the Black River Trail that ends with a coffee social. On this last Saturday in September, Team RWB will be sharing the trail with thousands more.

“It is hard to imagine just what that will be like to have thousands of runners on Black River Trail with us,” she said. “But I just know it will be exciting and a great time.”

Janssen said that he never ran the Army Ten-Miler run during his career in uniform. Having ran it twice as a retired sergeant major and a Department of Defense civilian, Janssen said it is one of those “bucket list” races that people simply have to experience.

That’s what he envisioned the Memorial to Monument Run being – an opportunity for those who might not be able to run the Army Ten-Miler but have an equally fun and memorable run that merges military and civilian communities.

Shuttles will take runners from Thompson Park to Fort Drum, starting at 5:30 a.m. The last shuttle leaves the park at 8 a.m., so that everyone is assembled for the playing of the national anthem by the 10th Mountain Division Band before the start of the race. Participants who need to return to Fort Drum after the race can use the shuttle service, starting at 11 a.m.

Janssen said that he hopes this will become an annual tradition, and one that passionate runners will add to their race calendars every year.

“I’m excited about this one, and I really think that people are going to enjoy it,” he said. “It’s a lot of work, but I hope it’s something we can continue into the future.”

Photo Caption: The Mountaineers Monument at Memorial Park is located in front of the 10th Mountain Division (LI) headquarters at Fort Drum, New York. Runners who sign up for the first Memorial to Monument Run, set for Sept. 29, will gather there to start the 11-mile run to Thompson Park in Watertown, New York. The event is hosted by Fort Drum’s Family and Morale, Welfare and Recreation in a partnership with the Watertown Parks and Recreation Department. (Photo by Mike Strasser, Fort Drum Garrison Public Affairs) (Photo Credit: Michael Strasser)