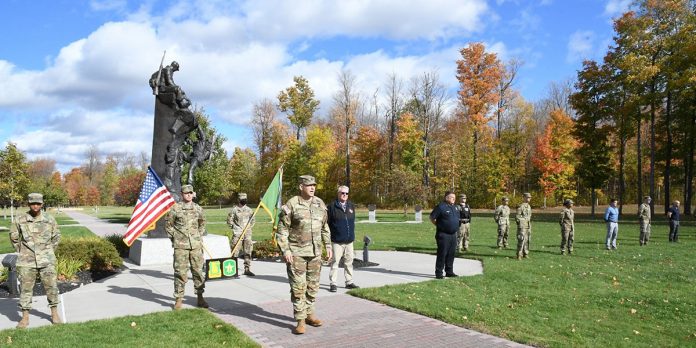 FORT DRUM, NY — When a 10th Mountain Division (LI) Soldier went missing from his unit, it was the concentrated response of Fort Drum’s first responders that resulted in a quick and fortunate outcome.

According to DES officials, a distressed Soldier had left his unit into an adjacent wooded area on foot. Within minutes of receiving the 911 call, several patrols were dispatched to that area to conduct a search. This included Military Police investigators, K-9 teams from the 8th Military Working Dog Detachment, and CID agents.

“Our main concern was for the safety of that Soldier, especially considering the rough terrain and close proximity to the Black River,” said Lt. Col. Matthew LeBlanc, DES director and 91st MP Battalion commander.

LaFlamme and Sgt. 1st Class Ryen Rascon, 62nd CID special agent, went into the Black River to retrieve the Soldier. Waist deep in mud and chest deep in water, the first responders struggled to get the Soldier free and back to the shoreline where responding personnel assisted with the extraction.

The Soldier was brought safely to shore and transferred to a local hospital for further evaluation.

“Without hesitation and concern for their own safety, the team executed a successful rescue and potentially saved this Soldier’s life,” LeBlanc said. “I’m tremendously proud of what each and every one of them did that day, and what they do every single day.”

The following individuals were recognized for their efforts:

“Without regard for their own lives and safety, their first thought was to save a life,” Terenas said. “It just makes me proud every single day that we have these kind of folks watching over our community, over our families, over our Soldiers every single day, and I couldn’t be happier.”

Among the 14 first responders awarded, LaFlamme and Rascon each were presented the Army Commendation Medal for their actions. They credited teamwork with the successful outcome, saying that everything went according to protocol.

“We back each other 100 percent, so if one goes, we all go together,” Rascon said.

“We’re just happy that the Soldier got the help that he needed,” LaFlamme added. “We come together in a time of need, and we’re willing to put our lives on the line to make sure that person gets the assistance they need.”