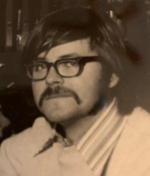 Arrangements have been entrusted to Cleveland Funeral Home, Watertown, NY.

Gary was born July 17, 1948, in Watertown, NY, to the late Wilford and Bertha Wilbur-Mucklow.

Gary served in The United States Army from 1968-1971. While in the Army he attended
Missile and Munitions School where he received a Nike-Hercule Missile repair
certification. He was honorably discharged.

Gary received many accolades as an analytical chemist and laboratory teaching assistant while in college.

Gary was an Associate Chemist for International Business Machines Corporation from 1980 to 1993. Most recently Gary was a professor of chemistry at Broome Community College, Binghamton, NY.

Surviving are a brother, William Mucklow, Swarthmore, Pennsylvania and a sister, Marian Mucklow Thomas, Hutchinson, Kansas and a brother, Rick Mucklow, Adams Center, New York. In addition he is survived by two nieces and three nephews.

Online condolences may be made at Clevelandfhinc.com