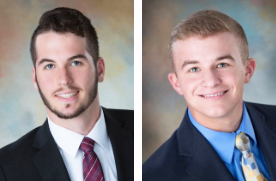 This year’s valedictorian is Thomas Dupee, left in the photo, with an academic average of 97.213. Mr. Dupee is the son of Lisa Polatas, Brownville, N.Y. and Thomas Dupee, Watertown, N.Y. Mr. Dupee is actively involved in numerous extracurricular activities. He is a current member of the National Honor Society, International Club, Math League, Student Council and is the Senior
Class President. Mr. Dupee was the quarterback and captain for the Varsity Football team and a captain for the Varsity Basketball team. He was named as a Frontier League All Star, First Team All-North, Second Team All CNY and was nominated for the National Football Foundation and College Hall of Fame Scholar Athlete Award.

Mr. Dupee has remained on the high honor roll during all four years of high school and was selected as a 7 News Academic All Star this year. He was the recipient of the Keuka College Ball Community Achievement Award and the Daughters of the American Revolution Good Citizens Award. Mr. Dupee plans to attend Buffalo State College in the fall to major in Fashion Design.

This year’s salutatorian is Joseph Wargo, right in the photo, with an academic average of 96.26. Mr. Wargo is the son of Joseph and Khrista Wargo, Watertown, NY. He is an active participant of National Honor Society and Teen Advisory Group. Mr. Wargo has been a member of the Varsity Baseball team for all four years of high school and was selected as a captain this year. He is a two year Frontier League All-Star. He also volunteers his time with the Shop with a Cop program.

Mr. Wargo has remained on the high honor roll during all four years of high school. He was the recipient of the University of Rochester George Eastman Young Leaders Award.

Mr. Wargo plans to attend Jefferson Community College in the fall where he will major in Sports Management.