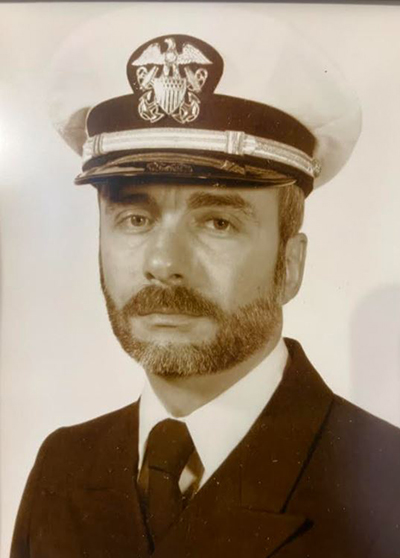 CAPE VINCENT, NY – Reverend Geoffrey Bruce Oswald, 76, of North Real Street, Cape Vincent, arrived in Heaven on Jan. 7, 2022. We are grateful he passed quickly and peacefully with no pain.

The son of Benjamin and Jane (Tarr) Oswald, he was born Jan. 27, 1945, in Bay Village, Ohio, where he spent his childhood years pulling clever pranks on his neighbors (without the approval of his parents). Despite his best efforts, and by the grace of God, Geoffrey’s mischievous youth produced a kind, compassionate and responsible young man who graduated from Lutheran West High School in 1963.  Raised in a devout Christian family, Geoffrey chose to dedicate his life in service to God earning an education in Ministry at the Methodist Theological School and Catholic Pontifical College Josephium in Columbus, Ohio earning a Masters degree.

Geoffrey attended Summer School at the Culver Military Academy in 1964 where he discovered his passion for sailing and military service. His new found nautical passion led to a commissioning in the United States Navy in 1979 where he served as Lieutenant in the Navy Chaplain Corps. Chaplain Oswald completed assignments at NAS Norfolk, NSA Bahrain, NTTC Orlando and the USS Independence (CV-62), where he earned the Navy Expeditionary Medal for the Iranian Campaign in 1980. Even though Chaplain Oswald’s Navy career was only six years before he was honorably discharged in 1986, it did provide a lifetime of sea stories to be shared with his family and friends.

In 1986, Rev. Oswald returned to the East Ohio Conference of the United Methodist Church where he continued his ministries serving hundreds of parishioners at multiple churches throughout Ohio before retiring in 2003. Rev. Oswald was a gentle soul who touched many lives during his career as a minister and the enrichment his life received in return is immeasurable.

Rev. Geoffrey Oswald spent his retirement in his Father-in-Law’s hometown of Cape Vincent, with his wife, Michelle Oswald (DeJourdan) enjoying the short Summers and not so short Winters of the North County. On any given day, one could find Geoff sitting on the back porch munching on kettle corn from the French Festival, sharing Navy stories and boasting about his son following in his Navy footsteps while taking in a beautiful sunset over the St. Lawrence River.  Geoffrey was a gentle soul who lived a full life of adventure, purpose and selfless service to God, country, family and friends. He will always be remembered for his kindness and service to others.

Rev. Geoffrey Oswald is survived by his wife of 35 years, Michelle Oswald and his son, Charles R. Willis III, a retired Navy Senior Chief. A true Sailor at heart, his remains will be buried at sea by the United States Navy.

Fair winds and following seas, Dad. You will be missed.

Arrangements made by the Cleveland Funeral Home, Cape Vincent, NY.

Online condolences may be made at ClevelandFHInc.com.