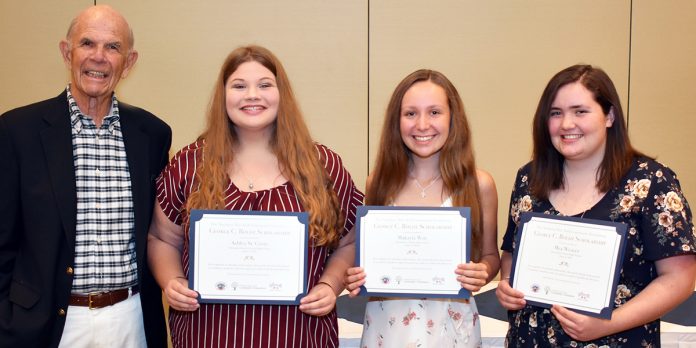 The scholarship honors the legacy of the castle’s builder, noted hotelier and philanthropist George C. Boldt Sr. Mr. Goodridge has led efforts to establish the scholarship with other descendants of Mr. Boldt and dozens of North Country donors who have made gifts to the scholarship fund at the Community Foundation.

Mr. Goodridge thanked all who have supported the effort and personally presented scholarship awards to this year’s recipients. A permanent plaque that pays tribute to founding donors was installed in Boldt Castle last summer along with a plaque that names recipients of the Boldt Scholarship. The Thousand Islands Bridge Authority, which owns and operates Boldt Castle as a leading tourist destination, has generously supported the scholarship program since its inception.

“Throughout his life in business, George C. Boldt Sr. believed in supporting people who showed promise. He generously helped them find opportunities for success,” Mr. Goodridge said. “Education is one of the most important things we can offer young people today. It is the great equalizer that leads to incredible opportunities in the world.”

Like his great-grandfather who immigrated to the United States from Prussia at age 13, Mr. Goodridge said, each of this year’s scholarship recipients embodies the character and perseverance to succeed.

“The three young women we honor tonight represent a great hope for our future and I have no doubt that George Boldt Sr. would be extremely proud of each one of them,” Mr. Goodridge said.

Rande Richardson, Community Foundation executive director, said the continued support from area donors for the Boldt Scholarship is a testament to the ways in which the Boldt legacy has impacted the region

“Mr. Goodridge has been inspired by the incredible generosity of local residents who have chosen to be a part of this special endeavor,” Mr. Richardson said. “Because of that leadership, he has chosen to do even more to work together to build the reach of this permanent educational resource.”

To help grow the George C. Boldt Sr. Scholarship at the Community Foundation and support future students, Mr. Goodridge has generously offered to match all gifts to the fund up to $50,000 through Dec. 31, 2020.

Ashley St. Croix, Thousand Islands Central High School, graduated with a Regents Diploma with Honors. She will attend the Culinary Institute of America at Hyde Park this fall, where she will study culinary business management with baking and pastry arts. She completed the two-year Culinary Arts program in baking and culinary at the Jefferson-Lewis BOCES Bohlen Technical Center, Watertown, where Chefs Janet Ramsey and William Landers mentored her. Ashley played one year of varsity volleyball and performed in concert band and choir. She also participated in Skills USA and was active in community service, volunteering in support of local charitable events and for the Salvation Army. Throughout high school, she maintained two part-time jobs at restaurants in Clayton and started her own cake business. She is the daughter of Adam St. Croix, Clayton.

Mya Weaver, Alexandria Central High School, salutatorian of her class and graduated with an Advanced Regents Diploma with Honors. She will attend the Rochester Institute of Technology this fall to study biomedical engineering. She is a National Honor Society member, a three-season varsity athlete, competing in soccer, basketball and softball. She was also a class officer, serving as treasurer during her senior year. She was captain of the varsity basketball team and a Frontier League All-Star Honorable Mention in soccer. Mya has been an active member of her family’s Relay for Life team, “Weaver Family and Friends,” and has donated her hair five times to the nonprofit charity Locks of Love, which makes wigs for children in need who have permanently lost their hair due to medical conditions. She is the daughter of Chrystal and Scott Weaver, Alexandria Bay.

Makayla Witt, Alexandria Central High School, graduated with an Advanced Regents Diploma with Honors in Science and is a National Honor Society member. She will attend Le Moyne College, Syracuse, this fall where she will study biology. She plans to pursue a career in the medical field. She participated in musicals since first grade, and later, select choir, and performed at the New York State School Music Association competition in piano and vocal music. She was also a member of the French Club, FFA, and Hearts for Youth.

She played varsity softball and is a member of the Alexandria Bay Figure Skating Club. She was selected as a delegate for Empire Girls State 2019 as a representative for Jefferson County. Makayla was also a class officer, serving as vice president during her senior year. She is the daughter of Mary and Michael Witt, Alexandria Bay.

About the George C. Boldt Scholarship

Mr. Boldt, (1851-1916) a one-time proprietor of the world-famous Waldorf Astoria Hotel in New York City, is known for his influence on development of the urban hotel as a civic social center and luxury destination. He and his family also left a philanthropic legacy that, among other things, emphasized education. In 1922, Mr. Boldt’s son, George C. Jr., established a scholarship program at Cornell University that bears his father’s name. According to an April 24, 1923, story in the “Cornell Daily Sun,” the elder

Mr. Boldt “always sympathized with an eager student whose only impediment to higher education was a lack of funds.” During his lifetime, Mr. Boldt also helped put at least 75 people through college, doing so anonymously. It is fitting that this legacy continues through the Northern New York Community Foundation George C. Boldt Sr. Scholarship.

The scholarship is a one-year award of up to $5,000 with three awards this year. Recipients are chosen based on academic performance, personal data, essay scores, and letters of recommendation. Students should show promise and potential and have demonstrated an interest in and service to their communities.