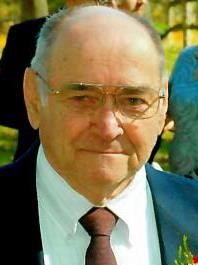 A gathering at the Lowville VFW will immediately follow the burial. Any food donations may be taken directly to the VFW on Monday morning any time after 9:00 a.m.

He worked construction and worked on the Eisenhower Locks in Massena, NY.

He went to work at Payne Jones in Lowville and retired from Fibermark in 1998 with over 30 years of service.

He was a member of the Glenfield Methodist Church, Lowville B.P.O. E. #1605, Lowville American Legion, and Lowville V.F.W.

He enjoyed spending time with his wife at their camp on Gomer Hill and winters in Alabama. He loved John Deere tractors and baseball, hunting and fishing.

He is survived by four children and their spouses, Michael W. and Darlene Ward of Glenfield, Kirk J. and Patty Ward of Seneca Falls, Phil D. and Cindy Ward of Lowville, Julie A. and Andrew Wetmore of Lowville; eight grandchildren, four great-grandchildren; several nieces, nephews, and cousins.

Jack was predeceased by his beloved wife Kay who died on April 5, 2011; his siblings, Lila Campbell, Walter, Richard, William, and Yvonne O’Neil.

Contributions may be made to Glenfield United Methodist Church or to the Lewis County Memorial Post #6912, Lowville VFW, West State Street, Lowville, NY 13367.

Condolences may be made online at www.isenekerfuneralhome.com