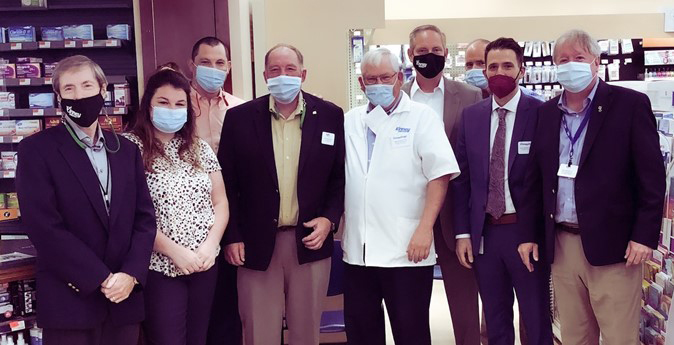 Each September, in preparation for October’s celebrations of American Pharmacist Month and National Employee Ownership Month, Kinney Drugs invites customers of all 96 stores to vote for their Favorite Employee and Favorite Pharmacist.

A 39-year veteran with Kinney, Mr. Palmer began his career as a pharmacist in Store #24 in Pulaski after graduating from Albany College of Pharmacy in 1982. In 1984, he was promoted to Pharmacy Store Manager, the position he holds today. The Palmers have truly made Kinney Drugs a family affair. Mark’s wife Karla has been a pharmacist with the company since 1987 and currently serves in a part-time role in Pulaski. Their son Steve was hired in 2011 as a pharmacist and now serves as a Regional Manager for Kinney. Their daughter Kathleen was hired in 2015 and is a pharmacist at Store #87 in Syracuse. When asked what it meant to be voted Favorite Pharmacist of 2021, Mark replied, “I am humbled and honored to have won this award.  I continue to enjoy the opportunities the corporation has afforded me throughout my career.” In Mark’s honor, Kinney Drugs will donate $1,000 to the Kinney Drugs Foundation. 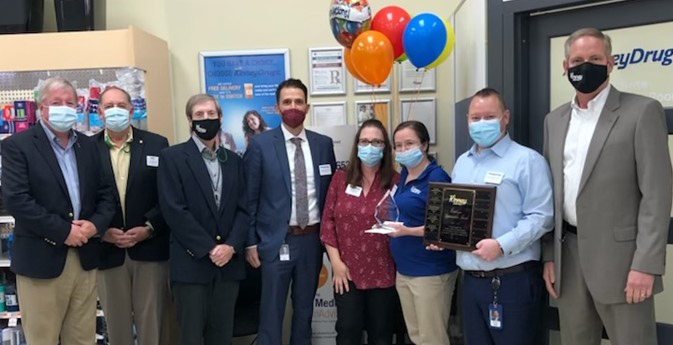 Ms. Simmons has been an employee of Kinney Drugs for more than 12 years. She began her career in 2009 as a Customer Experience Advocate and was promoted to Customer Experience Supervisor in 2012, the role she fills today. Her favorite aspect of working for Kinney Drugs is her daily interactions with her customers. Ms. Simmons said that she was “surprised, happy, and grateful” when she realized she had won this award for the second consecutive year. She said her first thought was “Again?!” She had been helping out in the Richfield Springs store fairly frequently, so when she was asked to report to her home store of Dolgeville that day, she was “…surprised, but I just thought they might have been short-staffed. It never occurred to me that I might have won!” When asked what winning the award again means to her, she replied, “I am so grateful for my customers. Thank you for choosing me again to be your favorite and I will continue to do my best!  In Rachel’s honor, Kinney Drugs will donate $1,000 to the Ilion Community Church.

Kinney Drugs President John Marraffa, R.Ph., said, “It was such a privilege to be part of these wonderful celebrations honoring these two outstanding people. I am so proud to have Mark and Rachel as part of our team. It is loyal and hard-working employees like them who are the heart and soul of Kinney Drugs.”

About Kinney Drugs Founded in Gouverneur, NY in 1903, today the independent, employee-owned company operates 96 stores in New York and Vermont. Kinney Drugs is part of the KPH Healthcare Services family of companies, a national provider of pharmaceutical and healthcare services with complementary businesses in both the retail and commercial segments of the industry. KPH is comprised of eight divisions: (1) Kinney Drugs, a chain of full-service drug stores located throughout New York and Vermont; (2) Health Direct Institutional Pharmacy Services, which serves long-term care and alternative care needs; (3) ProAct, Inc., a pharmacy benefit management company with sales offices throughout the country and a mail-order pharmacy; (4) Noble Health Services, a specialty pharmacy that dispenses medications used to treat complex and chronic diseases; (5) Kinnect™, an on-site clinical care pharmacy; (6) Aristacare, an infusion therapy pharmacy; (7) HomeLife specialized nursing support for in-home infusion services; and (8) Marra’s Homecare, a durable medical equipment company with three locations in Northern NY. KPH Healthcare Services is a 100% employee-owned company with approximately 4,450 employees that provides the highest quality pharmacy and healthcare services. Every aspect of KPH’s business is guided by the values of excellence, moral responsibility, and community spirit. Learn more at www.kinneydrugs.com.