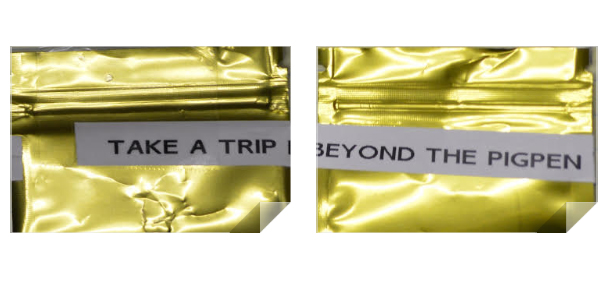 Early this morning, Sheriff Office personnel along with Dispatchers from St. Lawrence County Emergency services located a suspicious packet attached to the front door of the public safety building located at 49 ½ Court Street in the village of Canton. The package is described as a golden foil packet containing what has been field tested as the drug LSD. The Packet had a typed message of “Take a trip beyond the pigpen”.

At approximately 8:30AM this morning, Potsdam village police also located a 2nd packet attached to the rear door of the Village Police Department and reported this to Deputies later this morning.

At approximately 9:45AM Members of the State Police located a 3rd packet on the front door of the Norfolk Town Police Department.

At approximately 10:00AM Sheriff’s Deputies located a 4th packet on the front door of the Norwood Police Department.

All four packets appear to be identical and display the same message. Photos of the packet left at the Public safety Building are attached to this release.

“These cowardly acts towards all law enforcement are not going to be tolerated and to whomever this individual or individuals are, should be assured that we will be doing everything within our power to seek you out and hold you accountable to the fullest extent of the law.”

The Sheriff’s Office is the lead investigating agency and is working in conjunction with the members of the State police, Potsdam Police, Norwood and Norfolk Police Departments. Sheriff’s Office personnel are also working with the St. Lawrence County District Attorney Gary Pasqua as well as our Federal Law Enforcement Partners.

This is an active and fluid investigation and we ask anyone with any information to please contact the Sheriff’s Office leads desk at 315-379-2428. If anonymity is of concern, please submit a tip on the St. Lawrence County Sheriff’s Office App.

The targeted attacks on our St Lawrence County law enforcement are inexcusable & must be prosecuted.This is particularly painful to our North Country community after the positive grassroots #BackTheBlue parade in Waddington. #NY21 stands with law enforcement and their families!💙 pic.twitter.com/PGBzF8InXA