WATERTOWN, NY — State police responded to a reckless driver complaint on Interstate 81 northbound in the town of Richland at about 10:36 p.m. Tuesday, Nov. 13.

Troopers observed the vehicle, a 2008 GMC Envoy, northbound on I-81 and attempted to stop the vehicle. The driver refused to comply and accelerated to over 100 mph, troopers said.

The vehicle continued on I-81 through the towns of Richland, Sandy Creek, Ellisburg, Adams, Hounsfield, Watertown, and the city of Watertown before crashing into a parked car at the intersection of Washington and Ward streets.

The operator, James J. Dunn, and a passenger, Kyara L. Arletta, exited the vehicle and fled on foot, troopers said.

Both occupants were taken into custody after a brief foot pursuit.

The vehicle pursuit reached a top speed of 110 mph, lasted approximately 21 minutes, and covered a distance of approximately 30 miles.

The investigation revealed the vehicle was reported stolen and is being investigated by the Syracuse Police Department, troopers said. 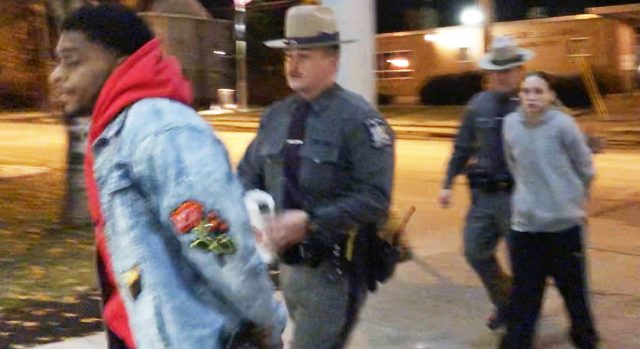 Dunn was arraigned before Watertown City Judge Anthony Neddo who remanded to the Jefferson County Jail with bail set at $50,000 cash or $25,000 bond.

During the arraignment at 6 a.m. in City Court, Judge Neddo was handed a thick stack of summonses. The judge asked how many traffic violations there were against Mr. Dunn and a trooper replied, “88”.